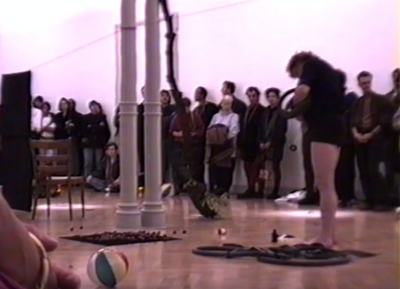 One of the common performances of the Black Market group (Black Market International). The collective, which had a changeable formula and composition, was established in Poznań in 1985 and comprised, among others: Boris Nieslony, Alastair MacLennan, Zygmunt Piotrowski, Nigel Rolfe and many more.
The BMI artists often gave simultaneous performances. During the “Air-Chamber”, Warpechowski delivered a show in which he used 10 bicycle inner tubes. After inflating them, he put them on and later scattered them all over the room, slashed them and cut them to shreds.