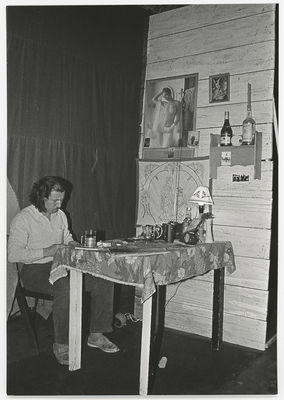 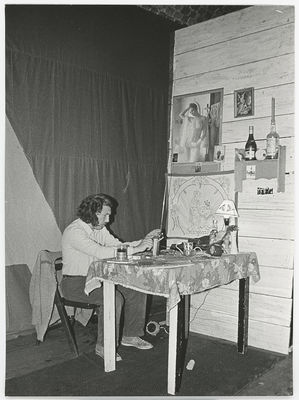 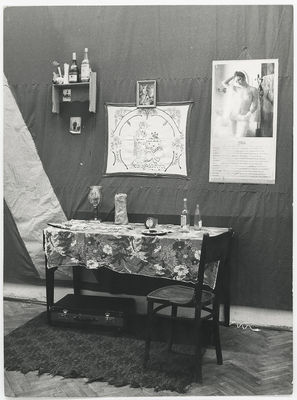 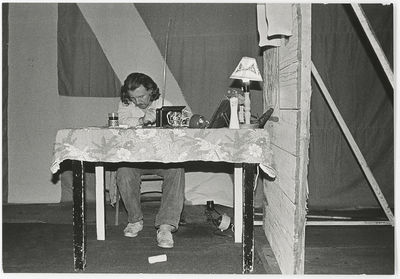 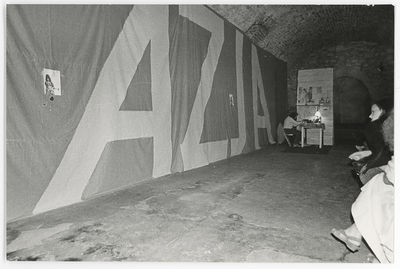 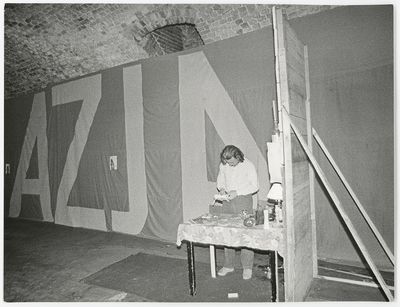 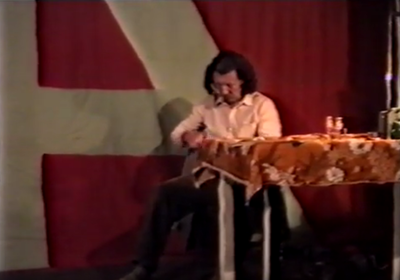 The “Asia III” performance almost exactly repeated the “Asia” action which was carried out at the BWA [Bureau of Art Exhibitions] in Lublin in 1987.
A red sheet of 4x14 metres, with the inscription “ASIA”, dominated the gallery. The “stage design” of the event was supplemented by a table covered with a patterned tablecloth, a chair, a transistor radio, a glass in an aluminium holder, an immersion heater, a bedside lamp, an alarm clock, an embroidered tapestry, a “holy picture”, a calendar with a naked woman, and other small items.
Warpechowski entered the room with a briefcase, pulled off his sweater, took a bottle of vodka and a skein of string out of the briefcase, and put the immersion heater into the glass of water. Subsequently, he started to wind the spring on the stick, poured tea into boiling water, lit a cigarette and turned on the radio, flicking through stations, took some pills, talked to himself, poured vodka into other bottles, before of foreign alcohol but now empty, said a prayer, set the alarm clock and finally went to sleep.
During these actions, the artist assumed the role of the “Everyman” of the Polish People’s Republic, so as he wrote himself, neither an Asian, nor a European. A man suppressed by the system, brought up by TV idols and intellectuals in the cult of mediocrity and admiration for Western tinsel.
“Asia” and “Asia III” differed mainly in the order of the activities. “Asia IV” also had a similar course.
“Asia II”, on the other hand, performed at Galeria Wschodnia [East Gallery] in Łódź in 1988, had an entirely different structure, and it involved the acting of the artist's 7-month-old granddaughter, Klaudia.
Moreover, the word “ASIA” appeared in the installation made for the Dungeons of Manhattan exhibition in Łódź in 1989. It had the form of large spatial letters painted in red and surrounded by scattered props from the previous “Asia” performances. In that place Warpechowski gave the “Performance of Weakness”.