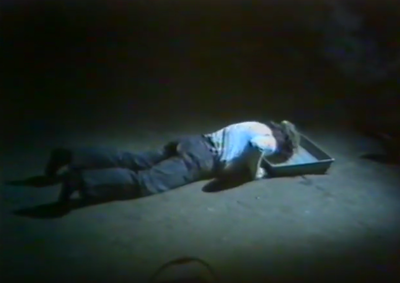 The performance was given during the international EDGE 88 festival, which involved, among others, Valie EXPORT, Carolee Schneemann and Stuart Brisley.
Warpechowski, smoking a cigarette, was sitting next to a paint tray filled with clean water. Then he lay down and, immersing his face in it, started to improvise a song. Marta Warpechowska, his wife, who assisted him in this action, poured black paint with a fish into the container. The artist went into the back room, where he put on a safety harness, a green costume with wooden “extensions” of hands and legs, and a papier-mâché head. Thus prepared, he crawled back into the room and plunged his head into the water again. Then the performer was suspended from a hook and started to swing around on a rope. He withdrew once again, whereas the stage was taken by a gutted chicken, attached to a wooden cross, resembling a puppet and manipulated over the tray by Marta. Next, the artist came back and his wife cupped him. In the last part Warpechowski spilt plaster and paint so that they formed a white and red circle. He placed a frog with attached paper wings in the middle of the circle and poured water on it.