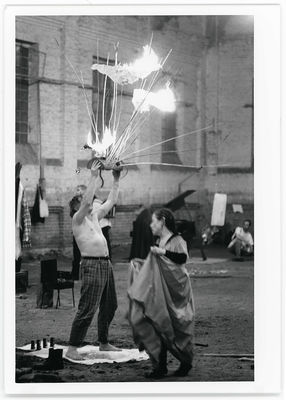 “Empedocles” (Empedocles of Akragas was an ancient poet, philosopher, and the originator of the concept of the four classical elements) actually constituted a series of partially improvised performances. For four consecutive days Warpechowski gave a three-hour show simultaneously with other invited artists. Apart from the members of the Black Market International group, there were: musicians from the Ensemble Neue Horizonte Bern, Janet Haufler – an actress, Roman Singer, Erik Hobjin, Ralf Samens and others.
Warpechowski repeated some motifs already known from his previous actions, as well as newly created ones, partially using a set of props which he had prepared before: an electric cooker, an electric kettle, a lime beam with holes for twigs, a pyramid of small mirrors, clay jugs, a dinner jacket, a bird in a cage, etc.