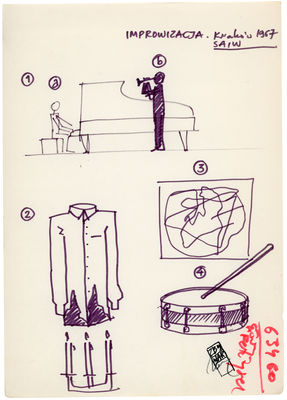 It happened during one of those “poetry evenings”, which took place every Thursday in Rynek 13 Club. The artist started improvising with music which he played on the piano standing in the room. After a while Tomasz Stańko joined him with a trumpet. Warpechowski continued improvising with words, for which the starting point was the quotation: One is not a poet constantly. One is a poet at times (Cyprian Kamil Norwid)
He took off his white, non-iron shirt and wrapped it around a five-branch candelabrum with burning candles. The shirt started to burn as well, and Warpechowski collected and immersed the burning nylon in a bowl of water. Blisters started to appear on his fingers.
He started to improvise another speech, beginning with a list of names of poets who had died tragically, such as: Gerard de Nerval, Marina Tsvetaeva, Sergiusz Jesienin, Lautreamont and Majakowski. Simultaneously, he scribbled something on a piece of cardboard, which had been prepared earlier, avoiding drawing anything.
Later on he took a snare drum and asked when and with what force the skin would break. He began with light strikes, gradually increasing the force, yet the skin remained intact. Warpechowski concluded that poets aren’t strong, but he managed to break the skin with the tip of the stick.