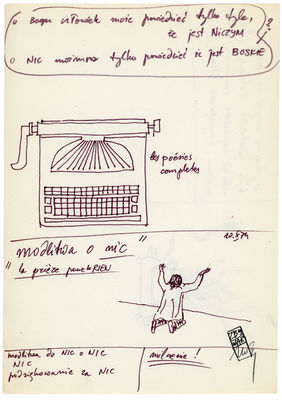 The incentive for this work was the statement that avant-garde artists use photo sequences to display a certain creative process, hardly ever using single photographs. Warpechowski meant to turn this trend around and create a scene for a single, specific image, which he called a “photo scene”. He went with a friend who was a photographer to an artificial heap made of debris and rubbish. A sequence of photos of the artist was made, in which he was shown in different poses (kneeling, skipping), and which were taken bottom up with a camera with a wide-field lens. Warpechowski chose one photo of poor quality with overexposures and scratches, and he enlarged it to the format 100 x 70 cm.

The word NOTHING is one of the most crucial for the art of Zbigniew Warpechowski. He used it in different contexts, both in performances and, for example, in sculptural works.